When music sounds so good it seems like a crime not to tell the world about it, so I want to introduce you to the amazing talent that is Jasmine Rodgers.

Jasmine was probably expected to venture into the world of music as her mother is a Japanese poet and father is a legendary musician. At an early age it seemed to be flowing through her veins as she learned to play the guitar and piano. After her brother heard her sing, he decided they had to work together and this led to them forming the group ‘Boa’. After releasing a few albums the band went their separate ways in 2005. Jasmine continued writing her own material and some were used for the soundtrack Armitage: Dual Matrix. Eager to create more of her own sound she was eventually able to create her debut self titled EP which was naturally well received. A few years after its release she was busy working on new material. She says that the inspiration for her new songs were found during her travels and most of it was thanks to a visit to the Joshua Tree desert in California. These songs came together to create her debut album ‘Blood Red Sun’. 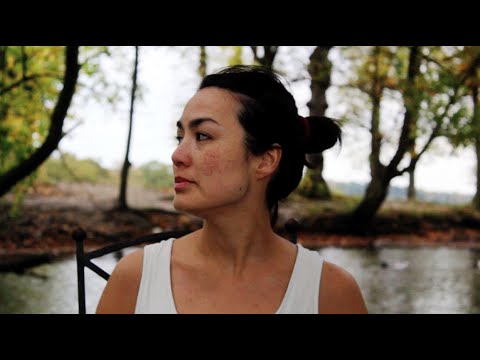 This album can only be described as beautiful. When I decided to feature it on my site I did not understand how difficult of a task it would be, but this was because of positive reasons which I will explain. As soon as the title track ‘Blood Red Sun’ begins you become lost in its sound thanks to the spellbinding combination of Jasmine’s vocals and guitar techniques. This combination grabs your attention from the start of the album and does not let you go until the albums final note. When that happens it leaves you wanting more, or maybe that’s just me. Due to this I have found it difficult to listen to this album with the mind-set that I needed to work so I could review her music.

Each song offers something different on this release but the high calibre of its rootsy folk core does not waver. As much as there are various layers to the music I can’t help but be fixated on Jasmine’s hypnotic guitar skills. She has put together some wonderful finger-picking arrangements that I could listen to all day and my highlight track ‘Icicles’ shows off this talent perfectly. The way she uses her 6 string friend to gives us something that sounds simplistic but has so much depth shows an impressive skill.

Like her guitar skills, Jasmine knows how to use her voice to grab the listener’s attention. With a soft tone that somehow sounds effortless in the way she adds the right level of emotion to her words is another reason to be impressed with what she has created. There is something about her storytelling technique that is so intimate and authentic. Lyrically is probably where she has surprised me the most as the depth and detail in her songwriting seems so strong by someone who has only had two releases. This is a huge compliment by me. I can only assume she has learned a lot about storytelling within her lyrics from her poet mother.

I find it difficult to choose a favourite song from the album as each one has something about it that deserves my time. But I think ‘Follow You’ is the one I would have to choose as this story about the end of a relationship has a personal feel to it. This shows off all the positives I have mentioned about the music of Jasmine Rodgers and confirms that this is a lady with an impressive songwriting talent.

With 11 stunning songs that will impress, it will be hard not to expect big things from Jasmine Rodgers and her album ‘Blood Red Sun’. I strongly recommend you give her music a listen by visiting her website at JasmineRodgers.com or visiting her Soundcloud and YouTube pages (by clicking the links). If you need to add the album ‘Blood Red Sun’ to your collection then it can be purchased from the usual online stores of Amazon, ITunes and CDBaby.

If I am honest, when it was recommended I listen to Jasmine Rodgers, I expected another folk clone as I heard she had a similar sound to Laura Marling. Well, I was wrong. This is a highly talented songwriting that not only has her own sound but I expect to go far and when you really listen to her music you will understand why. I am already looking forward to hear what she will create next and confident it will not disappoint.

If you want to find out more about more from Jasmine including future releases and shows then visit her website at JasmineRodgers.com or alternatively visit her social media sites at Facebook and Twitter. As always, my usual reminder to support the music that matters to you. If you have become a fan of Jasmine Rodgers then you know what to do, tell the world about her today!

“Blood Red Sun is a wonderful Folk record. It is a very hypnotic, melodious and incredibly relaxing album which is easy and pleasant to listen to. The album has a somewhat mysterious and ghostly feel to it. The melodies of each track are captivating tunes with stunning, pure sounds that are unique and mesmerising.” Building Our Own Nashville, Hannah Jessica 2017